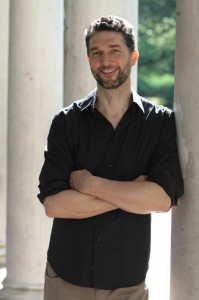 A native of Zurich, Switzerland, Michael Vitali hit the New York music scene in 2002, shortly after graduating from Berklee College of Music. Though he arrived with little more than a change of clothes, a drum set and a voracious appetite for music, Michael immediately impressed his audiences and peers with his innate sensitivity and dynamism.
The appropriately named Vitali maintains an astonishing performance schedule, with appearances in New York’s most popular venues including Fat Cat, Smoke, Cleopatra’s Needle, The Metropolitan Room and Bar Next Door. Michael has toured throughout the US and Europe, he has recorded on several albums and performed live on WKCR.
Steeped in jazz tradition, Michael is also known for his versatility. He is continuously exploring the breadth of musical offerings and showing off the distinct colors of his palette in many corners of the city. Michael has made his mark in the Haitian music community, recording and performing with Monvelyno Alexis, Alegba and Friends and Buyu Ambroise. He has collaborated with Irka Mateo of the Dominican Republic, toured with Madagascar’s B-Tropical and performed in New York City’s foremost World Music venues such as SOBs, Nublu and La Caye. He is featured on Nigerian singer/songwriter Lorens Chuno's soon to be released album Rhythm Sustained. Michael is also active on the rock scene. He has played at The Bitter End, Arlene's Grocery and the late CBGBs with Irish singer/songwriter Scott Maher and toured the east coast with Squeeze Rock, an accordion driven hip-hop/rock band.  A 2017 highlight was a performance with Xavier Cardriche at the Prospect Park Bandshell.
In addition to leading his own groups, Michael has worked with Lionel Loueke, Ed Cherry, Eve Cornelious, Rick Margitza, Sebastian Noelle, Deyna Stephans, Melissa Aldana and many other jazz greats.
Among Michael’s current projects is the Michael Vitali Trio with Yuka Tadano on bass and Justin Wert on guitar.  Their sophomore album Scratching The Surface featuring Melissa Aldana on tenor saxophone, is scheduled for release on June 15th. The trio has toured Europe extensively in 2015, 2016 and 2017 and a 2019 tour is in the works.
Michael performs regularly with Chris Bacas, Takeshi Asai and The Stan Killian Trio. He is host of the weekly Cortelyou Jazz Jam Session at Bar Chord in Brooklyn.  Throughout his career Michael has been a dedicated teacher.